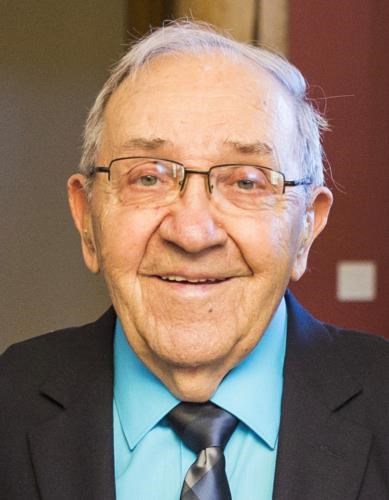 Walter Pocalyko, for decades a leader in Bethlehem Township and the Bethlehem Area School District, died in Weslaco, Texas, on June 14, 2021. He was 96.

Born in Palmerton, Pennsylvania, on May 26, 1925, he was the son of Ukrainian immigrants and a 1943 graduate of Stephen S. Palmer High School. He served in World War II in the 466th Bombardment Group of the Eighth Air Force. As a USAAF corporal on a B-24 crew flying supplies into Germany on April 15, 1945, he was present at the liberation of Bergen-Belsen. He was featured in the documentary "The Other Band of Brothers" in 2004.

A 1950 graduate of Muhlenberg College, he had a 17-year career as a pricer and manager at the Bethlehem Steel Corporation. In 1957-58, he built and operated Broad Street Shell, a full-service garage on Bethlehem's West Side.

He was appointed to the Bethlehem Township School Board in 1960 and was the last surviving member of the original 1961 Bethlehem Area School Board. At a contentious 1964 board meeting, he spontaneously suggested naming Bethlehem's new high school "Freedom," to complement "Liberty" as the alternative to "Eugene Gifford Grace High School," the name fiercely advocated by Bethlehem Steel executives. He became Bethlehem Township Zoning Administrator, Auditor, and Secretary to the Board of Commissioners, at the time the jurisdiction's only professional manager. In 1969 the school board named him Secretary Business Manager of the Bethlehem Area School District, where he served for twelve years, overseeing the district's budget expansion, school bonds, transportation, union contract negotiations, tax policy, and the construction of more than twenty public schools including open-concept elementary schools. He played an instrumental role in Harrisburg during the passage of the Public Employee Relations Act of 1970, that granted teachers the right to strike. After departing leadership of the Bethlehem Area School District, he held the same position of Secretary Business Manager for public schools in the Sharon, Antietam, and Bangor Area School Districts until his retirement from public service in 1993. He considered the Bethlehem Township Master Plan in the 1960s to have been his greatest professional achievement, and he frequently regretted providing the deciding vote for Bethlehem's adoption of the Initial Teaching Alphabet. He consulted to Pennsylvania school districts and intermediate units and was considered one of the commonwealth's foremost experts on school budgets and school bond financing.

Walter Pocalyko was a founder of the Bethlehem Jaycees, a member of American Legion Post 269 in Palmerton, the Bethlehem Township Volunteer Fire Company, and secretary-treasurer of the Roosevelt Democratic Club of Miller Heights. He made the first encampment at Camp Minsi BSA at Pocono Summit in 1949, and was Scoutmaster for the eastern Pennsylvania troop at the 1953 National Jamboree. He was a 49-year Mason in Bethlehem Lodge No. 283 F&AM. The "Walter Pocalyko Seminar Room" in Muhlenberg College's Ettinger Building is named for him. Until 2019 at the age of 94, he was treasurer of his resident-governed retirement community, the John Knox Village of the Rio Grande Valley.

He was a member of Zion First Hungarian Lutheran Church of Bethlehem, and served on the church council and as treasurer.

The Reverend Kathryn Pocalyko, Pastor of Lutheran Church of our Saviour, North Chesterfield, Virginia, and Dean of the Richmond Conference, Virginia Synod, Evangelical Lutheran Church in America, will preside at a memorial service at Light of Christ Lutheran Church, 2020 Worthington Avenue, Bethlehem, Pennsylvania 18017-4955 on Saturday, July 10, 2021 at 2:00 p.m. The family will receive visitors at the church before the memorial service from 1:00 p.m. to 2:00 p.m. Interment will follow at Hellertown Union Cemetery with military and Masonic honors. Arrangements are by the Pearson Funeral Home. Persons wishing to make a memorial contribution in Walter Pocalyko's memory should please consider a Lutheran charity or a local council of the Boy Scouts of America.
Obituary by the Morning Call
Do you like this post?
Tweet