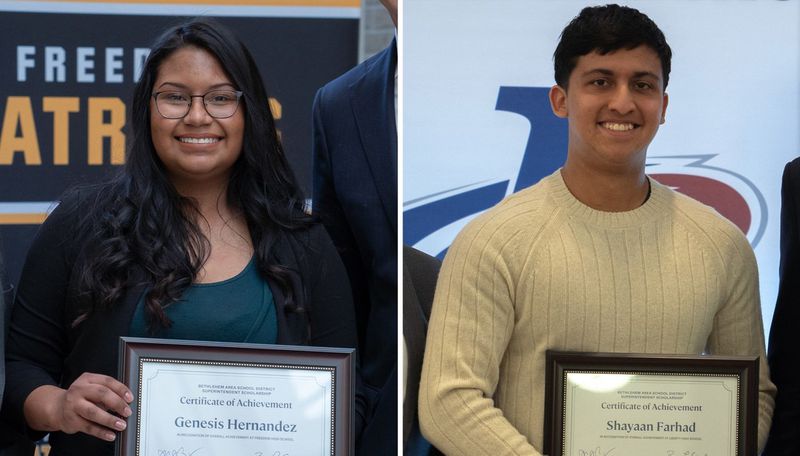 Genesis Hernandez, a Freedom High senior, and Shayaan Farhad, a senior from Liberty High School, are this year's BASD Superintendent Scholarship Winners. The scholarship will cover tuition for the two students for all four years.

Genesis Hernandez has wanted to be an orthodontist since she was 5 years old. She was inspired by her stepfather, who is a dentist in her home country of Nicaragua.

“I’ve always been around that, and I just fell in love with it,” she said of the dental profession. “I love science and math.”

Hernandez, 18, was chosen, alongside Shayaan Farhad, a graduating senior from Liberty High School, as one of two winners who will attend Moravian University tuition-free thanks to the scholarship, which is now in its seventh year.

“My mom was very happy,” Farhad, 18, said. “She gave me a hug, and she was emotional. And when my mom gets emotional, I get emotional.”

The partnership between the BASD and Moravian provides four-year tuition scholarships to two graduating seniors — one from each of the district’s two high schools. This year’s winners were chosen from 41 applicants.

“It was tough because as inspiring as these two stories are, the other kids’ stories were pretty powerful, as well,” Superintendent Joseph Roy said. “I think in both cases, it was just the level of commitment above and beyond to being successful no matter what the hurdles were that were thrown at them.”

Roy said the scholarship provides winners with the ability to complete all four years of undergraduate study without concerns they may have to drop out for financial reasons. Moravian’s tuition for the 2022-23 year is $48,569.

“The college degree is maybe not the sure thing to a better career path that it used to be,” Roy said. “For these kids, it is. ... It will get them to a better place generationally.”

There are no strict requirements for choosing scholarship winners. However, applicants had to be accepted at the university and demonstrate financial need. Each applicant also had to write an essay about a challenge in their life and how overcoming that adversity will help them succeed at Moravian.

“We’re looking for a situation where we’re really going to be able to change somebody’s life, because they’ve overcome obstacles and still proven that they’re resilient and can be successful in the classroom,” Remsing-Engelhardt said.

Both Farhad and Hernandez are high academic achievers who come from immigrant families living in Bethlehem. Farhad’s mother is from Afghanistan.

“Both of them were so mature and so poised, and they have been through so much throughout their lives already,” Remsing-Engelhardt said.

Farhad plans to major in biology at Moravian and aspires to attend medical school.

“It’s the study of life, so it pertains to people,” he said of his love for biology. “You just have knowledge about the human body, so with that one, I feel like you can really help people with it.”

Farhad is also captain of the Liberty boys’ tennis team and plans to play tennis at Moravian, he said. He is also a member of Liberty’s debate team and volunteers with the Muslim Association of Lehigh Valley. Additionally, Farhad helps take care of his elderly grandmother.

Hernandez also sings in the Freedom Chorus and works as a server at Kirkland Village, a senior retirement community in Bethlehem. She will be a first-generation college student, and she said the scholarship is another chance for her to give back to her family.

“I put in the work, and now I’m finally seeing the reward that came from the sacrifices that I made,” Hernandez said.