Liberty football countdown to kickoff: New coach and new attitude have Hurricanes ready to kick up a storm, plus 3 things to know 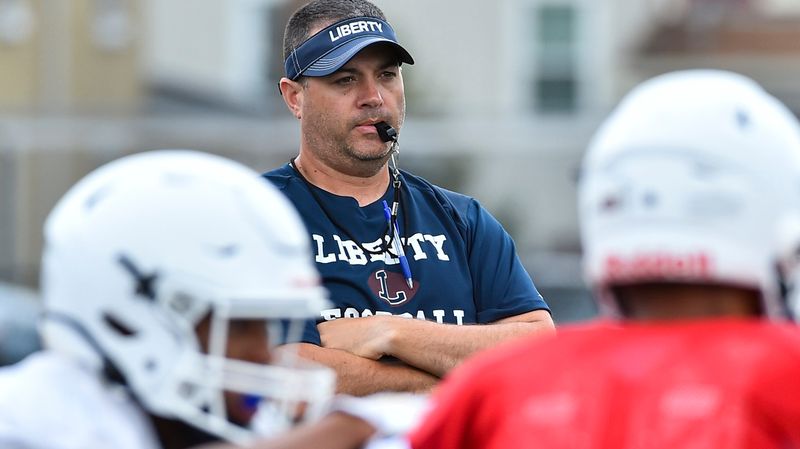 Even on a 90-degree day during heat acclimatization, Sarkozy exuded enthusiasm for the 2021 season.

“It’s fantastic, I love it out here,” Sarkozy said. “Since we didn’t have double sessions last year, it’s really great to be out here and share the experience with all of the guys and all the excellent coaching we have. We’re all nasty and competitive and we’re ready to make our mark.”

It’s that kind of passion that new coach Shawn Daignault has inspired. The longtime college assistant who came to the Lehigh Valley to become an assistant at Moravian in 2009 has enjoyed settling in Bethlehem.

He spent the past three seasons as defensive coordinator at Northampton and replaces John Truby, who went 37-46 in eight seasons.

Liberty has 80 players on the varsity, plus 45 freshmen.

After a winless season and the disappointment of not playing rival Freedom at the end of the campaign, there’s a new upbeat vibe with one of the Lehigh Valley’s most tradition-rich programs. “Sometimes change creates some growing pains, but once you embrace it, you’re happy for something new; whether it’s better or not we’ll see when we start playing games,” Daignault said. “Different has created some excitement.”

Three tidbits on the Hurricanes

Daignault surrounded himself with some veteran coaches who have been around the block more than once, and some Liberty and Becahi alums who can relate well to the kids.

Frank Lane who was a standout at Easton and coached with Jim Morgans at Freedom and Parkland in addition to a three-year stint as head coach at Salisbury, is on the staff. He adds energy along with guys like Chad Gruver and Joe Wooten who had been on Truby’s sideline.

“Both coordinators are from the college ranks and neither one has a full-time job they have to worry about, so they’re basically full-time coordinators,” Daignault said. “Then you have guys like Levi Brown and Anthony Orlando and Tevrin Brandon; guys who have done it at a high level and have been on NFL fields, and the kids respect that. When Levi Brown speaks to our linemen, they listen. The coaching energy level has been really high.”

Daignault said the competition for the starting quarterback position may come down to the wire. It’s between senior Peyton Carson and junior Tommy Mason.

“Peyton had a quarantine issue last year, even though he didn’t have COVID, but he still had to quarantine for the first two weeks of the seasons ... and then he hurt his elbow, or else he might have been in line to be the starter last year,” Daignault said. “Tommy started two games late in the year when they were making up some games.”

Daignault said the decision is tough because both have been playing well.

“They’re not making it easy on me,” he said. “One day I think it’s one guy and then the next day I am thinking it’s the other guy. Both will have a role in our offense. They’re both athletic enough to run routes and various things and it might make us pretty multi-dimensional to have two guys who could line up at quarterback or other positions.”

Daignault installed new offensive and defensive systems and said there’s still a lot for the players to learn and the learning is not limited to Xs and Os.

Daignault wanted a road trip for his team’s lone scrimmage and he got one going to Delaware Valley in District 2 on Saturday morning.

“We play at East Stroudsburg South in our opener and I want to even practice traveling,” Daignault said. “Delaware Valley is a quality program and they’re pretty far up there. After going up there, going to South on opening night will seem like a short trip.”

“I feel like we got great young guys on the line and in the skill positions,” Sarkozy said. “We’re going to show people in the Valley that we’re here and we’re going to make a statement this year. We’re not the same kids we were last year. We’re fired up and I hope everyone is fired up to see us as well.”

All games at 7 p.m. unless otherwise noted

The Morning Call
CONTACT
Keith Groller has covered sports at The Morning Call full-time since 1982. He's been inducted into five local Hall of Fames for his coverage, won the Publisher's Excellence award in 1999, and won numerous community service awards. He covers HS football, basketball, softball, Lehigh football and major auto races at Pocono.
Do you like this post?
Tweet