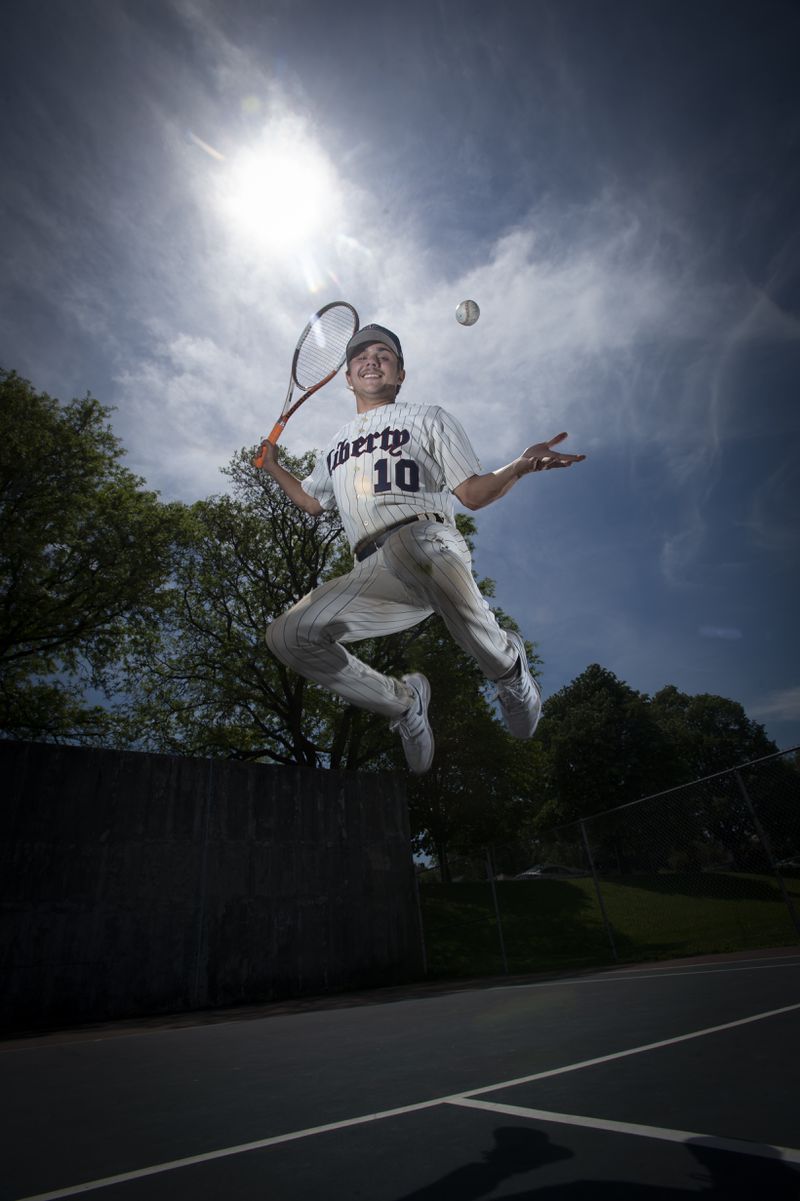 And the speedy center fielder isn’t playing on just your average baseball team either. Baseball is arguably the top sport at Liberty right now. In fact, the Hurricanes are among the top teams in the area. They hold the No. 2 seed in the District 11 6A tournament and will open play at home Tuesday against No. 7 Northampton. The program has also received attention around the state due to its depth and explosive offense.

Marshall, who carries a 4.4 GPA and is ranked in the top 10% of his class, is a key component in the success of both teams.

Competing in two sports in the same season is nothing new to Marshall. He’s actually grown accustomed to it.

Marshall grew up on the tennis court and the baseball diamond. His mother, Lori, is the director of racquet sports at Northampton Country Club and taught her son the sport when he was very young.

“I’ve been around tennis my entire life. I spent every summer of my youth at Northampton Country Club sweeping courts and helping my mom at her work,” Marshall said. “I never really played competitively prior to Liberty and mainly just hit around with members and other workers. My mom taught me everything about tennis and whenever she had the free time, we were out on the court hitting and waiting for her next lesson.”

However, it was baseball that Marshall really took to. He began playing in the Lehigh Little League with several kids who are now on the Liberty team. Some of those teammates — Brayden D’Amico, Eric Ludwick, Jack Rothenhausler, Blake George, Sam Raineri, Brandyn D’Amico, and Nick Lees — also played travel ball with Marshall on teams such as the Riverdawgs and Steel Sharks.

Marshall traveled up and down the East Coast with his teammates, playing (and winning) state and national tournaments.

All in the family

The Marshall family breeds talented athletes. Lori Marshall was a four-time District 11 tennis champion and finished a perfect 56-0 against area competition while at Saucon Valley. She was inducted into the school’s Athletic Hall of Fame a few years ago.

Her oldest son, Logan, was a standout baseball player at Notre Dame-Green Pond and was named the 2007 Morning Call Player of the Year.

Not surprisingly, Wyatt Marshall was a natural on the tennis court, which was a pleasure for his mother, who has invested so much into the sport. That talent then transitioned onto the baseball field.

“Wyatt picked up tennis so easily but has always been mostly a baseball player. Whether it is tennis or baseball, you will always see him try hard and enjoy the competitive side of the sport,” Lori Marshall said. “I feel like he has been lucky that both head coaches [at Liberty] have allowed this to happen and have been very supportive and flexible with their schedules. Even the kids from each team have been supportive of the other sport. I don’t think it would have worked out as well as it did if Wyatt didn’t get along with the teammates and coaches of both teams.”

Two places at once

Marshall has endured some taxing demands this season. Spring sport athletes are expected to train and perform each day. For Marshall, it’s double that workload.

This usually means there’s not a day Marshall isn’t wearing his No. 10 on the baseball field with the 17-2 Hurricanes, or taking serves on the court with the 16-1 Liberty tennis team.

“Having practice every day for both tennis and baseball took up most of my time. With school and work on top of that, trying to find time to spend with friends was hard ... but I’m lucky because it feels almost as if I have two extra families to spend time with,” Marshall explained. “Although the practices were always tough and I would always be tired when I got home, I got to spend my day with my best friends playing the sports that I love. So, even with a lack of free time I was still able to have a good time with my friends.”

Marshall’s athletic career has included a few injury setbacks along the way, but nothing he couldn’t overcome. He’s a mentally tough competitor who doesn’t take a day off.

Take last month’s Eastern Pennsylvania Conference tennis championships, for instance. Marshall came off the court with leg cramps — not uncommon for an all-day tennis tournament. Marshall’s playing style relies on his athleticism. He wins many points by running down shots and outlasting opponents.

Moments after Marshall won bronze in a tough No. 3 singles flight at the EPCs, he stumbled off the Parkland tennis courts and sprawled out onto the grass to recover.

After a few minutes of stretching, Gatorade chugging and a quick change into a dry shirt, he drove to his next playoff destination: Liberty baseball’s EPC battle against Northampton.

Following Liberty’s district team tennis final against Parkland (May 8), Marshall fell to a formidable opponent, then rushed off the court. His mom had the car running/waiting outside of Northwood Racquet Club ready to race them back to Liberty High School for a Senior Day baseball event.

Marshall recognizes two coaches who have encouraged him throughout his high school years.

Sharing a great athlete is not easy — especially when both teams are championship contenders in the same season.

Coaches Chris Conrad (tennis) and Andy Pitsilos (baseball) encouraged Marshall to fulfill his potential in both sports, and for good reason. Marshall finished his tennis season 7-2, and offers great speed in the outfield and on the base paths for the baseball team.

Conrad is grateful to have Marshall provide depth to his singles lineup. But Conrad also loves what Marshall brings to the team in addition to wins.

“Wyatt is a great kid on and off the court. He is a hard worker who is focused and determined to help his team. Wyatt is also an awesome student,” Conrad said. “It is difficult to have a multisport athlete in the same season, and you have to have a plan put in place that is agreed to by all parties. Wyatt, myself, and Coach Pitsilos worked on a schedule that worked best for everyone. He was determined to help us win another team championship, and though we fell short this year, he was a big part of getting us to the final.”

Pitsilos, Liberty’s all-time winningest baseball coach, views Marshall as a “great kid with great grades” and is thrilled to see his player excel in his other passions.

“He’s a ‘yes or no sir’ kid, he’ll run through a wall for you,” Pitsilos said. “He came to me the past three years and asked me; he didn’t tell me, ‘Coach, I’m playing tennis.’ He’s very polite, plus he’s one of the best tennis players in the school. He has an opportunity to play at the next level in both sports. ... So you have to give a kid like him a shot. I would never take that opportunity away from him.”

Marshall has the utmost respect for his coaches and is grateful both have provided such an uncommon opportunity.

“None of it would have been possible if it wasn’t for Coach Conrad and Coach Pitsilos,” Marshall said. “Both coaches put in extra time, work, and lots of effort into helping me play both sports. I could not have asked for two better coaches and I’m happy to compete for both of them.”

End of the road

Marshall’s tennis season concluded when the Hurricanes finished runner-up to Parkland at the district team tournament. Now, he is solely focused on helping the ‘Canes baseball team in the district playoffs.

He’ll get one more crack at it, alongside friends he grew up playing with. Then, it’s off to Virginia Tech where he plans to major in architecture and walk on to the baseball team.

“It’s really hard to process exactly what I’m feeling at times. Especially coming out of a pandemic that cost us half our junior and all of our senior year, not to mention our junior year of the spring season,” Marshall said. “I’m not going to let myself really process everything until we are finished and we have achieved our goals. I want to stay focused on the task at hand, win districts, and then win a state championship.”

Regardless of his team’s outcome in the playoffs, Marshall has left a lasting legacy.

Perhaps the most admirable attribute Marshall displays is his selflessness. In the end, Marshall believes Liberty’s results are more important than his own.

“At the start of both seasons, I was enrolled in three AP classes and balancing two sports, academics, and work. It was the most physically and mentally draining two months of my life.” Marshall said. “ I love to compete. So as hard as it’s been, I’ve loved every minute of it.”