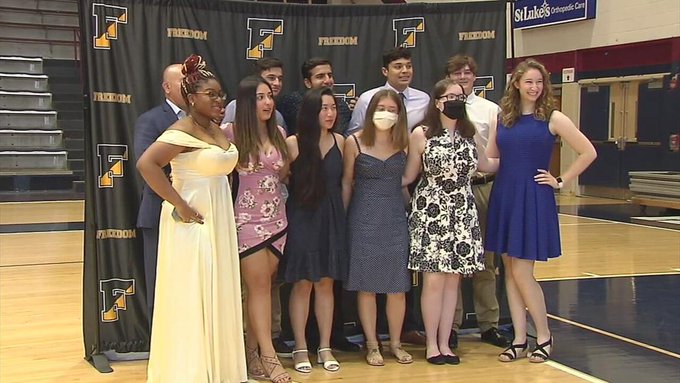 Congratulations to this class of 2021!

For senior Augusta Chelsea Dunkwu, this day is music to her ears.

This is signing day.

For the last eight years, the Bethlehem Area School District has set aside a day to honor the top 20 academic students from Freedom and Liberty High Schools, who are headed off to college.

"Every school has athletic signings," says Superintendent Dr. Joseph Roy, adding "But I wanted to put the spotlight on academics, because ultimately that's what we're about as an educational institution."

August and her peers have impressive goals.

"I'm going to the University of Chicago," she says, double majoring in political science and mechanical engineering.

His focus will be math.

These students are on fire - and not just because it was so hot outside, they had to move the ceremony indoors - they're turning up the heat academically, headed to some of the nation's most prestigious colleges, including Stanford, Georgia Institute of Technology, Duke and more.

"Of course, I have a little bit of fear, that natural stress, because I'm going to a new environment, but I've done things like that before, so I'm just excited to see what I can do in that new environment," Augusta says, smiling.

It goes without saying, every student deserves an extra pat on the back after the challenges of the 2020-2021 school year. But that's what makes these parents, and these administrators even more proud. Because students like Augusta didn't just survive the last year - they thrived.

"And if you have that mindset, it was really - not easy, but worthwhile," says Augusta.