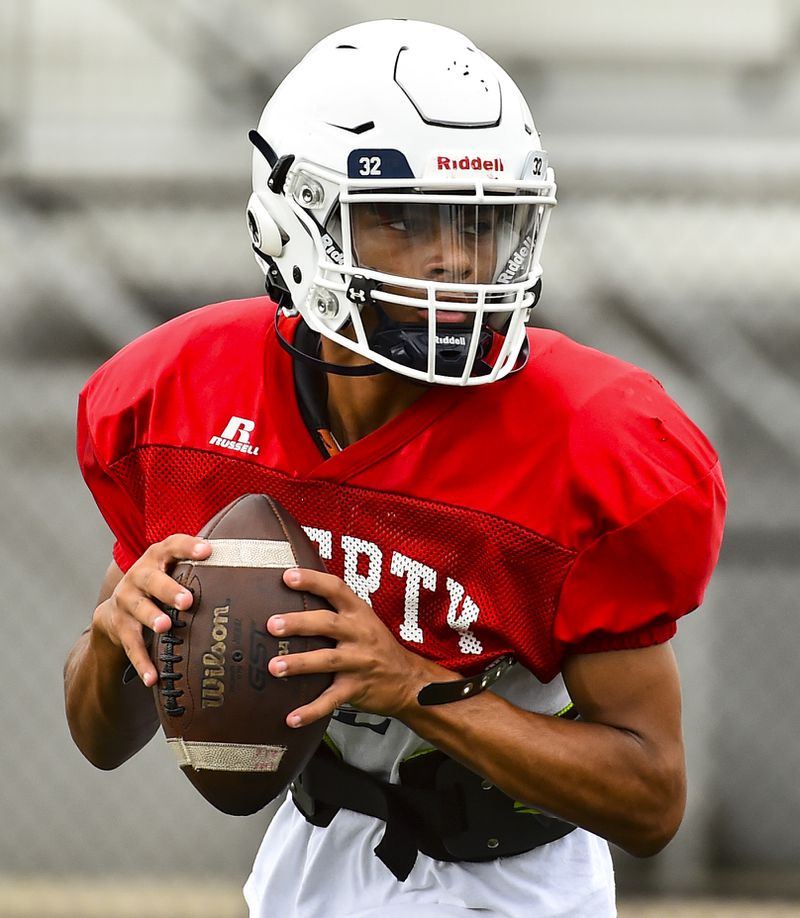 The Hurricanes, who went 0-6 last year, opened up the Shawn Daignault era and the Eastern Pennsylvania Conference season in style on Friday night with a 24-16 win over an East Stroudsburg South program that went 4-0 last season and outscored opponents 248-7.

Sophomore kicker Connor McLaughlin’s 26-yard field goal with 8:53 left in the second quarter turned out to be the decisive points as Liberty erased an early 8-0 deficit in a defensive battle at Memorial Stadium.

The Hurricanes put away the Cavaliers in the fourth quarter with two touchdowns – the first an 80-yard scoring strike from Tommy Mason to Karim Brice and the second a Kyndred Wright 41-yard sprint up the sideline with 7:29 remaining.

East Stroudsburg South set the final score with a TD and 2-point conversion in the last 60 seconds.

“It’s amazing,” said Brice, a junior who caught three passes for 158 yards and scored two touchdowns. “To finally get a win, and in a game nobody thought we weren’t going to win, people think it’s the same old Liberty but it’s not. We’re here to make a change.”

The Hurricanes used their superior conditioning and depth to seize control over the final 24 minutes.

Wright, who finished with 100 yards on 13 carries, gained 87 yards on the ground in the second half as Liberty rolled up 133 overall after halftime. Mason, a junior, threw for 189 of his 281 yards in the first half.

It definitely was a new-look Liberty team. The Hurricanes committed only two penalties – both coming in the final minutes.

“I’m happy for these guys, especially our seniors,” Daignault said. “They’ve been through a whole lot with the coaching change and the COVID season, as well as not having a lot of success. To get that monkey off their backs right away and get the first win of the season, hopefully it gives us confidence going forward. They deserve this. The work has been put in. I was proud of the way we did it tonight, for sure.

“Our conditioning showed and we made a couple of adjustments. It was a great second half.”

East Stroudsburg South picked up on Friday night right where it left off in 2020.

Coach Matt Walters’ Cavaliers matriculated the ball down the field against Liberty’s defense, using 14 plays to cover 70 yards for the touchdown. South converted two key fourth-downs – both in Cavaliers’ territory – and senior running back Ron Blake capped the opening possession with a 4-yard run.

Blake then converted the 2-point conversion with a power run.

Liberty’s first possession ended when a Mason pass slipped through the hands of Brice and landed in the waiting arms of South defender Nekhi Spencer.

Brice, on the Hurricanes’ next possession, more than made up for his mistake. On third-and-15, Brice took an outside screen pass 69 yards for the Liberty TD. Brice ran behind a convoy of big blockers, as coach Dave Brown’s linemen raced outside and paved the way.

“I should’ve caught it,” Brice said of the ball that slipped away. “But I didn’t let it get me down. I came out the next drive and kept playing.”

East Stroudsburg South lost several players to injuries (and exhaustion) though the game, including its top two running backs.

Blake and Gary Welge, who combined for 95 rush yards in the opening half, both left the contest and did not return. Blake finished with a team-best 72 rush yards. Senior Bobby McClosky threw for 163 yards for the Cavaliers.

“First off, hat’s off to Liberty,” said Walters, whose program lost 25 seniors off last year’s squad. “It’s a very well-coached team. Halfway through the game our coaches looked at each other and said that’s a very well-coached football team. Their kids fought for four quarters and it was a well-deserved victory.

“We expected our inexperience might show up tonight and it did. We lost a lot of guys and when you lose both running backs, two linebackers and two defensive ends, it’s tough.

“That’s what you worry about when you play a Valley team. They had about 80 players walk off the bus tonight and they wore us down.”

The Hurricanes open play in the EPC’s South Division; the Cavaliers begin their EPC North campaign.

Michael Blouse is a freelance writer.