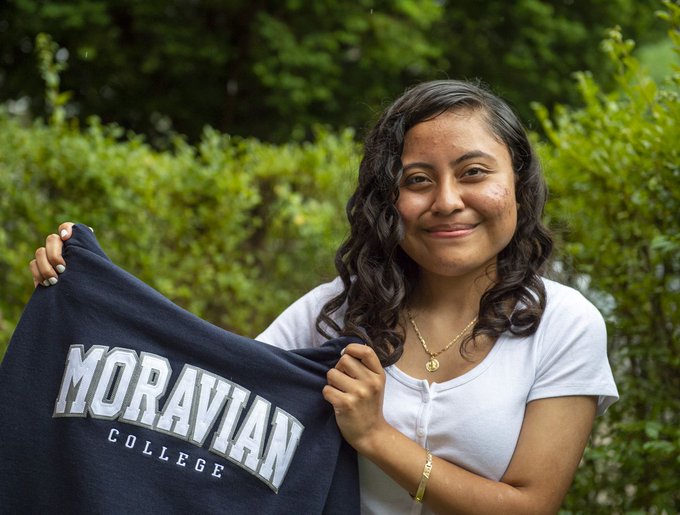 She was always the voice for her immigrant family. She’s taking a step toward being a voice for children as a pediatrician by going to college.

When she was 13, Giselle Ponce got a job at a fruit and vegetable stand in Allentown, making $6 an hour.

She’d work long hours on weekends and after school on Fridays, helping set up the stand, bagging orders and restocking, regardless of whether it was hot or raining.

“It was difficult,” she said. “But I knew I needed a way to afford to go to college.”

Now Ponce, who graduated Thursday from Liberty High School, is poised to go to Moravian College, the next step in achieving her dream to become a pediatrician. But money will be less of a concern; she is one of two Bethlehem Area students to win a Superintendent’s Scholarship to the school.

Since 2016, Moravian College has awarded two Bethlehem Area students full scholarships, minus room and board. Students must submit an essay in their application, and the winners are chosen by Superintendent Joseph Roy. Students are typically the first in their family to attend college. The other winner this year was Freedom High School student Jakelyn Valenzuela.

Ponce’s father and mother, who immigrated from Mexico and achieved a second and sixth grade education, respectively, always told her education was important. They knew they didn’t have enough money to send her to college, so they encouraged her to work and save for her education.

That’s exactly what she did. She planned to go to Northampton Community College, following in the footsteps of her older brother, until she learned she won the scholarship. She’s a middle child, about five years apart from each of her brothers.

Ponce is a well-rounded student who works, gets good grades, plays soccer and the saxophone, tutors children, is a member of the National Honors Society and participates in other activities.

“She’s just so delightful and hardworking and always put 100% into everything,” her 11th grade Spanish teacher, Jennifer Chomo, said. “She’s just such a humble, sweet human being.”

Ponce always had her hand up in class and was ready to participate, Chomo said.

Ponce was forced to grow up quickly. Her parents didn’t speak English, so she was often their voice, speaking for them at doctor’s appointments and parent-teacher conferences. From when she was 6 or 7 years old, she would help translate bills and other letters the family received.

“I always looked after them, whatever they needed, I was there,” she said. “I knew I had to mature faster than other kids my age.”

She also lived by her father’s words of advice: Life is never going to be easy and there are going to be doors that open and doors that close. No matter what, just continue to work hard and be the best person you can be.

Spanish was Ponce’s first language, but she picked up English quickly by watching television and talking to her brother. When she got to school, she went into a program for children who speak English as a second language and learned more about forming sentences.

In class, Ponce was quiet at first, but once she adjusted, she was funny, engaging and kind, said Kristin Jacoby, her 11th grade English teacher.

Jacoby didn’t know about all the challenges Ponce faced until they spent time reviewing her scholarship application.

“I’d always thought she was an impressive student, but [that] made it clear how hard of a worker she is and how determined to be successful she is,” Jacoby said.

In addition to going to Moravian to study biology, Ponce hopes to work in an elementary school next year to help children learn English. She wants to make a difference in their lives.

That’s what she wants to do as a pediatrician too.

“Growing up, I know what it’s like to fear different things,” she said. “If I can change a kid’s life and make them a better person, that’s what I want to do for the rest of my life.”