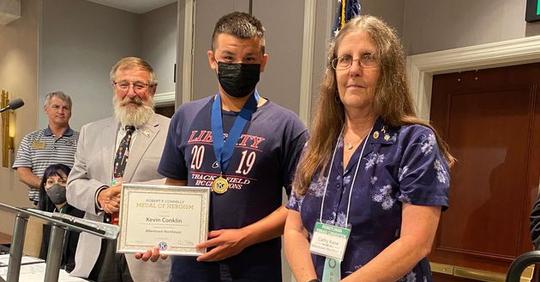 A Bethlehem teen who dove into flood waters to save a young boy last summer before both were sucked into a drain pipe was honored Saturday with a medal for his heroism.

“After reading and seeing on television the brave actions of Kevin last August, I felt that he needed to be recognized,” said Cathy Kane, president of the Allentown Northeast Kiwanis Club. " … Our club feels that Kevin is definitely worthy of receiving this award, and Kiwanis International agrees.”

Last August, the teen jumped into the rising flood waters near Farmersville Road at Bethlehem Township Municipal Park to save a young boy who disappeared into the drainage pipe under the road. Both went through pipe before resurfacing on the other side.

It happened right after severe storms caused heavy rain and flooding across the region due to Tropical Storm Isaias. One Lehigh Valley resident, Yesenia Then, died after her car was swept away by flood waters as she was driving through Upper Saucon Township on her way home to Allentown.

Kevin and his mother, Qiang, were taking a walk when they saw the boy playing in the water in his swim trunks and goggles, according to previous reports. Multiple people stopped to help get Kevin and the boy out of the water and back onto the road.

Kevin, who is now a senior at Liberty High School, suffered some scratches from the drain pipe, but was otherwise uninjured.

After he saved the boy, Kevin was honored by Bethlehem Mayor Robert Donchez, who recognized his bravery by proclaiming Aug. 18 Kevin Conklin Day.

“Kevin is to be commended for his heroic actions and for putting his life in danger to try to save a young boy,” the proclamation stated.

Qiang said she is thankful to all the local officials and residents who have reached out to support Kevin since last year.

Since the incident, she’s received many cards wishing Kevin well and thanking him for saving the boy.

Kane said the club wanted to give Kevin the award at last year’s convention, but it was canceled due to the COVID-19 pandemic.

The medal, which so far has been awarded to more than 600 people, is given to an individual who has risked or given their life to save someone else, according to the organization. It was named after a Kiwanis member who died while trying save a woman’s life in 1966, and was created the following year at the group’s convention.

The Morning Call
Molly writes trending and explanatory pieces that focus on the topics readers care most about at any given time. Previously she wrote for The Press of Atlantic City, covering breaking news, crime and public safety. She got her start at the Reading Eagle, writing obits. She's originally from Schuylkill County and graduated from Kutztown University.
Do you like this post?
Tweet