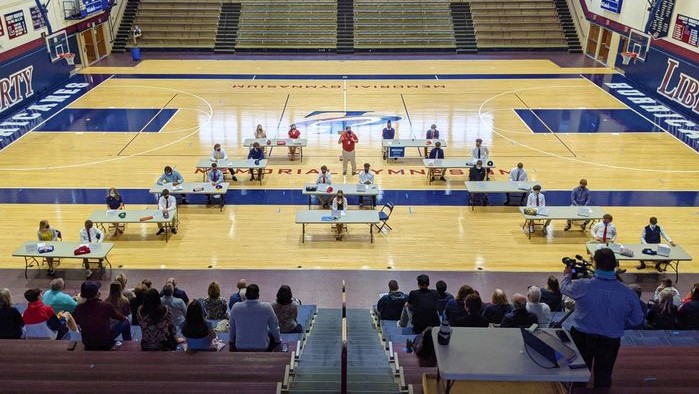 Liberty High School celebrates the college plans of 23 student athletes. Congrats to all the students who have committed!

The pair was part of a ceremony Friday afternoon in Memorial Gymnasium that honored Hurricanes athletes who are continuing their playing careers at the next level. Twenty-three seniors were recognized during the event, which had to be hustled into the gym after a rainstorm scrapped plans in Bethlehem Area School District Stadium.

Frank, a former lehighvalleylive.com Boys Cross Country Runner of the Year, will attend Temple University. The Liberty standout said a visit that included a discussion with Easton graduate Kevin Lapsansky was a big influence.

“He told me … how awesome it was to build a culture and how awesome it is to be in the city,” Frank said. “I’m a big city person, so that was very attractive to me.”

Flynn, who will be a defensive specialist for the Lafayette College women’s volleyball team, has already heard from several members of the Leopards roster, which is stocked with local talent.

“There are girls from Parkland, Easton, Nazareth, who have reached out to me and talked to me about the program,” Flynn said. “I’m super-excited that there are local girls there as well.”

Leanna Deegan (Easton), Kelly Austin (Nazareth) and Grace Steurer (Parkland) play at Lafayette, which was high on Flynn’s list for a while.

“Lafayette was always one of my top schools since I started the recruiting process. I wanted to play in the Patriot League; I wanted to play Division I volleyball,” she said. “... The coaches there were super welcoming, and all the girls I’ve met so far have been nice and excited for me.”

Emily Jobes, another Runner of the Year, found an athletic and academic match across the state at the University of Pittsburgh.

“I want to major in biology. Pitt has a really strong science program all around. I got to have Zooms with a lot of the team and I really liked the culture and positive environment that they have going on there,” she said. “I like the coach’s vision for where he wants the program to go. It just felt like the right fit.”

Devin Fletcher gave Liberty another Division I commitment with his pledge to the Penn State baseball program. The senior, who is 6-foot-8, saw his recruitment accelerate as he gained more strength and filled out his frame.

“I love the coaching staff there. I think they have a winning culture. They’re on the uprise. It’s just the place to be right now for me,” said Fletcher, who’s hitting 90 mph with his fastball.

Jack Rothenhausler, another standout Liberty pitcher, made his pledge to East Stroudsburg University. Before he turns his attention to the Warriors, however, he wants to make an impact this spring after losing the entire 2020 hardball season.

“It’s our last year; we just want to have fun, do well and make the most of it,” Rothenhausler said.

That sentiment was echoed by the rest of the ‘Canes who will conclude their high school careers in the coming weeks.

“Some of the stress is gone and now it’s about finishing strong for my last season and seeing what we can all do as a team,” Jobes said.

“I want to enjoy every moment I have with the team right now and, hopefully, grab a few more district championships,” Frank added.