Liberty Alum has been a Crossing Guard for 50 Years 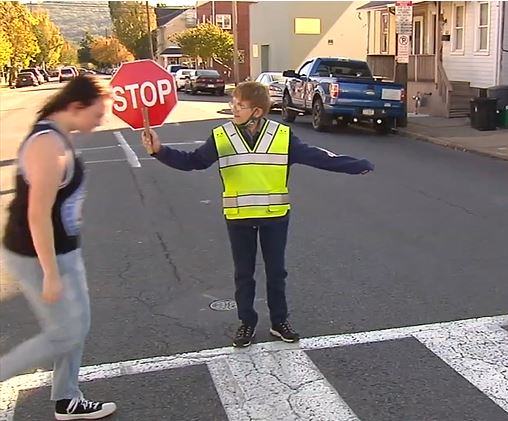 The Lehigh University Police Department partnered with Bethlehem Police along with an anonymous donor to provide winter coats, hats, and gloves to the crossing guards throughout the Bethlehem area.

The departments also recognized Bethlehem resident Susan Schmidlie, who has been working as a crossing guard near Thomas Jefferson Elementary School on East North and Linden Street since 1972.

“You have some close calls, and I already had one car that almost hit me, but it makes you feel great that you’re helping the kids get to school,” said Schmidli.

The event was held in the Rotunda at City Hall Tuesday morning, and officers made sure each guard received their clothing in preparation for the winter season.

“Bringing in our crossing guards today served a dual purpose. We wanted to honor our longest-serving crossing guard Susan Schmidli and we also wanted to provide them with winter gear. At one point we were only able to provide them with the stop sign paddle and a reflective vest but thanks to a partnership with Lehigh University Police Department and an anonymous donor we were able to provide the guards with winter gear which includes coats, hats and gloves,” said Bethlehem Patrolman Michael Buckley.

After 49 years at the same job Schmidli says it’s the crisp cool air in the morning and the students that keep her going, although she doesn’t always remember them all.

“Some I don’t remember, and they come and say, ‘you never changed from the day you crossed me,’” said Schmidli.

The Bethlehem Police Department is currently looking for more crossing guards to join the department, and anyone who is interested can visit Bethlehem's website.

“That’s what it is, it’s about the safety, if a kid is wearing light-colored clothing during the day and is looking at their phone and is not paying attention and someone driving by may not see them. But if we have a crossing guard out there wearing a vest with a stop sign making sure that traffic is stopping for those kids, it’s a lot safer for them,” said Buckley.

The Bethlehem Police Department plans to honor Schmidli in May for 50 years on the job and her contributions to the community.