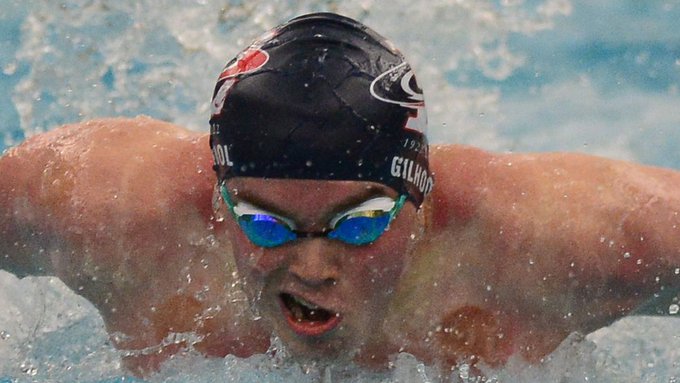 Liberty’s Patrick Gilhool swims in the 100-yard butterfly on Wednesday, March 17, 2022, during the PIAA Swimming and Diving Championships at Bucknell University in Lewisburg. Gilhool finished in first place with a time of 47.69.

Patrick Gilhool is adamant that there is no such thing as the perfect swim.

The Liberty High School senior also might say there is no such thing as a perfect meet.

Gilhool, at Thursday’s PIAA Swimming & Diving Championships at Bucknell University, swears he came close to the perfect swim. The hardware hanging around his neck is proof he enjoyed a near-perfect meet.

Gilhool struck gold in the Class 3A 100-yard backstroke inside Kinney Natatorium, prevailing in 47.57 seconds to capture his third title of the PIAA’s two-day event.

He also claimed a silver medal as part of a Liberty relay on Day 1.

Not surprisingly, Gilhool was named the most outstanding swimmer of the state meet.

“Wow, what an amazing two days,” he said. “It’s been great. The whole thing’s been an adrenaline rush full of all highs and really no lows. The meet kept getting better and better, and as a senior, you can’t go out much better than the way I went out.”

Thursday’s races were all about stamina and toughness, Gilhool said.

He went all-out in six races on Day 1, including qualifiers and finals, and he said wasn’t sure how much he had in reserve for Day 2. Still, he qualified first in the Thursday morning prelims for the early evening finals.

“It was a great swim for the both of us,” said Gilhool, who won four gold medals and was named most outstanding swimmer of the meet at the District 11 championships. “I have a lot of respect for Ganesh and we pushed each other hard.

“It definitely hurt physically but that’s what you practice for. Swimming fast while you’re hurting, I didn’t grasp that until this year. This week was not a one-year thing. It’s been four years of dedication and hard work.”

On Wednesday, Gilhool won the 100 butterfly and was part of Liberty’s 200 freestyle relay team that won a title. The Hurricanes also captured the silver medals in the 200 medley relay.

Liberty coach Reik Foust noted that Gilhool set or was part of four school records during the postseason.

“If you were to say Patrick’s the fastest swimmer ever at Liberty,” Foust said, “I think it’d be fair to say it. I couldn’t be prouder of Patrick and all he’s accomplished.”

Liberty placed sixth overall in the Class 3A team standings with 138 points. Seneca Valley won with 188.

“I’m so proud of the guys this week; they all four [Gilhool, Addison and Malcolm Collins and Daniel Lehr] started with me with swim lessons in Bethlehem,” Foust said, “and to have this as the culminating meet, there’s been a lot of memories and a lot of fun.”

Parkland’s Kayla Johnson also made lots of fun memories during an outstanding four years as a Trojan.

A 14-time District 11 champion, Johnson capped her career with a fourth-place finish in the 100 freestyle. She clocked 50.36 seconds. Downingtown East’s Alex Fulton, who bested Johnson in the 50 free on Day 1, won in 49.04 seconds.

Johnson entered the event as the No. 1 seed.

“I am disappointed,” she said, “but I’m proud of everything I’ve accomplished through my high school career. I can proudly say I broke a pool, district and school record; I couldn’t ask for more. High school swimming has given me my best friends and I will be forever grateful.”

Johnson collected third- and seventh-place state medals as a junior.