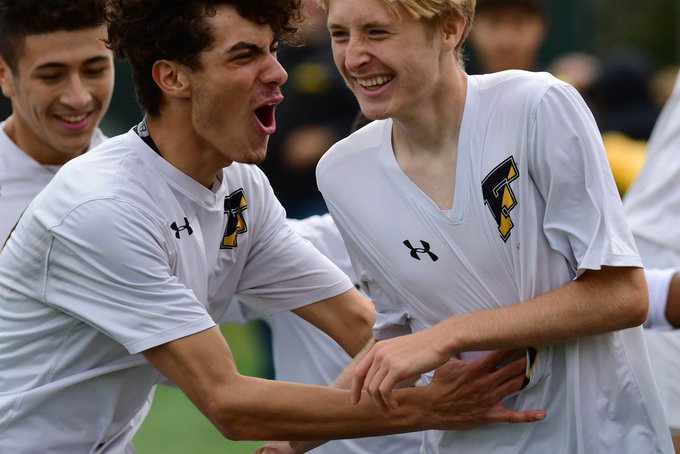 Coach Matthew Reightler’s club improved to 17-3 overall, captured its 13th straight win and clinched the top seed for the District 11 Class 4A tournament.

Freedom lost to the Trojans 2-1 in overtime during an EPC regular-season contest on Sept. 25. The Patriots previously reversed a 3-1 regular-season conference loss to Central Catholic in Wednesday’s semifinals with a 3-1 win.

“It was definitely motivation,” Tichy said. “The revenge tour is finally complete now. It feels great.”

He assisted on senior Michael Krents’ tally with 31:51 left, scored on a hard right angle with 19:05 to play, converted a penalty kick with 7:43 remaining, then assisted on Austin Hoffert’s corner-kick goal with 2:47 left.

Tichy increased his season goal total to 31 and his assist total to 23. He’s benefited from a midseason move from midfield to forward.

“My dad [Wolfgang] has really helped me out,” Tichy said. “Everything is clicking. It’s all coming naturally.”

The Patriot scoring star drew praise from his coach, Parkland coach Patrick Birns, and from his fellow captain.

“He can score a goal anytime he chooses to,” Reightler said. “We had an opportunity that resulted in a yellow card that I thought was unfair. Then 30 or 60 seconds later, he turns and puts one into the back of the net. He’s a leader and a competitor, and in my opinion, he should be the league MVP.”

Hoffert, Freedom’s defensive ace, meanwhile, was at a loss for words.

Freedom imposed its aggressive, offensive style on a Parkland squad that prefers a more controlled pace.

Birns’ Trojans entered with a 17-0-1 record in their previous 18 games. They reached the final with a 1-0 OT semifinal-round win over archrival Emmaus on Wednesday night.

Parkland fired off six shots on goal, though few were dangerous chances. Freedom was credited with 11 shots on goal.

“It definitely wasn’t our game today, but they took it to us,” Birns said. “You get beat 5-0, they’ve got to do something right. They were all over us. We didn’t respond well to their intensity.”

“Before we came here today,” Reightler said, “we talked about playing our game. We weren’t going to back off, we were going to play an offensive style of game. I think we caught them off-guard a little bit. We had some great possessions, we had some great opportunities, we finished our chances and we didn’t allow a lot of quality opportunities.”

Overall, it was a well-rounded performance from Freedom. Reightler appreciated the contributions of all 11 of his starters, including the backline of Vicenzo Rosete, Owen Lynn, Blaine MacIlroy and Hoffert, along with goalkeeper Tristan Willey.

“We were trying to keep our marks, make sure if they cut across to communicate with each other and just really survive,” Hoffert said.

Now, Freedom will try to repeat what it accomplished in 2018 when it captured conference and District 11 4A championships.

The Patriots enter the 4A tournament as the No. 1 seed. Parkland will be seeded second.

“It’s definitely a bigger goal,” Tichy said of the District 11 title. “My freshman year, we also won EPCs and districts, so that’s the goal now to repeat that. We have a ton of momentum now.”