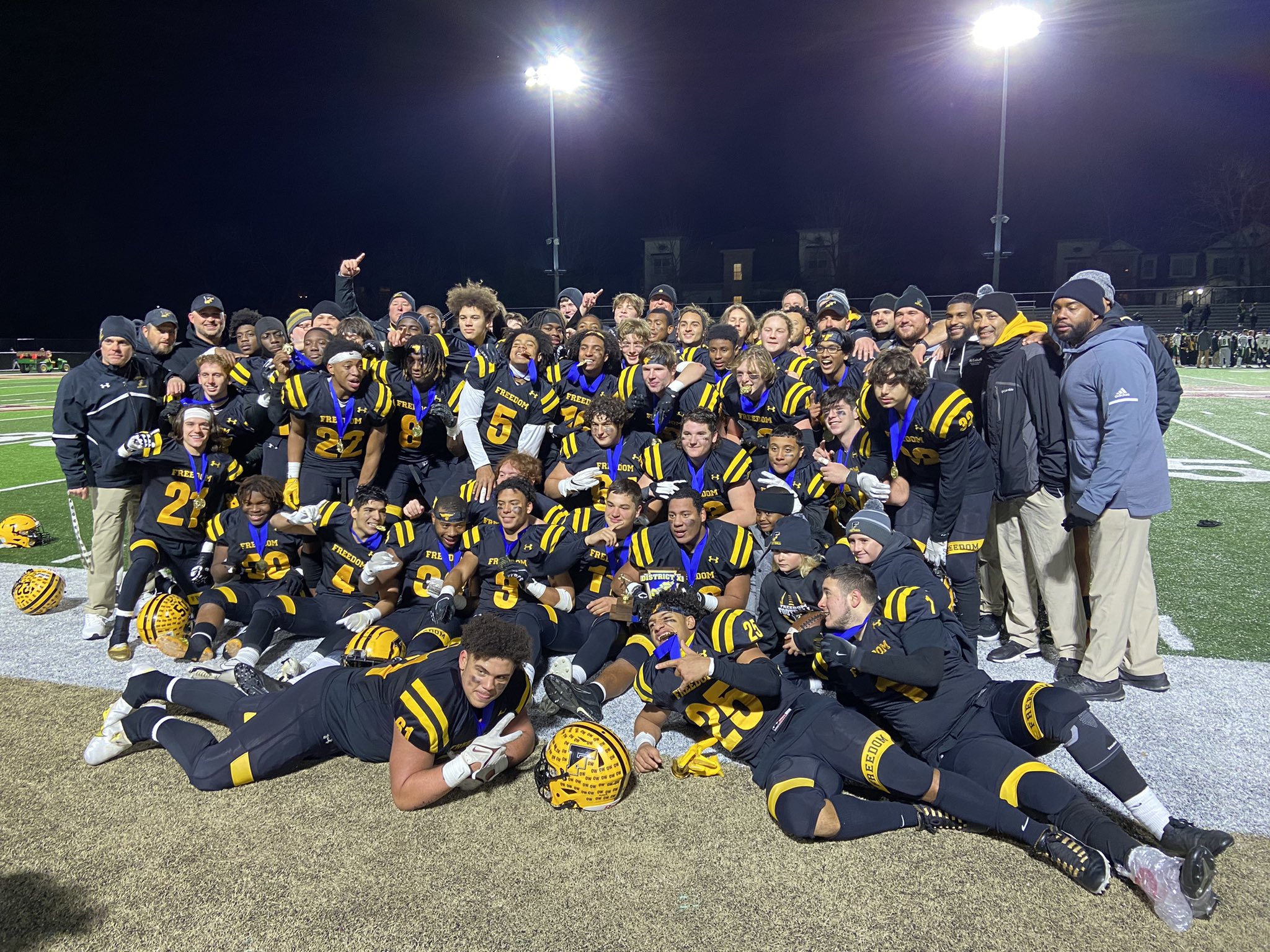 A year earlier, Freedom walked off the field at Whitehall’s Zephyr Stadium with a sense of what might have been had a few plays gone a different way in a 37-29 loss to Nazareth in the District 11 6A championship game.

It was a loss that burned inside the Patriots for a year. Friday night on the same turf field at Whitehall, the disappointment of 2020 finally was vanquished.

Riding a big rushing performance by the Eastern Pennsylvania Conference’s leading rusher, Deante Crawford, and an opportunistic defense that collected five Emmaus turnovers and turned away the Green Hornets three times inside the red zone, Freedom pulled away to a 28-14 win over Emmaus and its second 6A crown in four years.

On a night filled with proud Patriots, none was prouder than longtime Freedom defensive coordinator Greg Moore and not just because he has two sons on the team.

“I told our kids all week that defense wins championships,” Moore said. “Hats off to Emmaus because they play tough and they have a lot skilled kids. But we told our kids that if we’re going to win the championship, we’ve got to play Freedom defense and that’s fast and physical. We were able to get some turnovers and were able to hit their quarterback a little more than the first time we played them. Overall, the kids just followed the game plan.”

It was Freedom’s ninth win in a row after a 2-2 start and sends the Patriots into the state tournament next weekend where they are likely to get a rematch with Philadelphia Catholic League power St. Joe’s Prep, who defeated Freedom in the state quarterfinals in 2018.

It doesn’t matter who they play. The Patriots are glad to still be playing on Thanksgiving weekend.

“We had an emotional loss last year and had the promise to come back, but we had to do the work necessary,” said Freedom coach Jason Roeder. “We had to walk the walk and not just talk about it. It was really gratifying and I’m just really proud of our kids and coaches.”

Crawford, who entered the game with a league-best 1,397 yards despite missing two full games and missing parts of two others due to injury, ran for 186 yards on 26 carries and scored two fourth-quarter touchdowns to put the game away after it was a one-score game most of the second half.

“It started at practice,” Sangster said. “We’ve been going over it, watching it and going through all the drills. Defense wins championships, that’s what our defensive coordinator has been telling us. It just feels great to get the gold medal. I feel blessed.”

The Patriots avenged a 13-6 loss to Emmaus on Sept. 3 and ended a valiant run by the Green Hornets, who entered the 6A tournament as a fifth seed and advanced to the final with road wins over Nazareth and Parkland.

Emmaus, which finished 9-4, has never won a district title. The Green Hornets had opportunities, but couldn’t overcome the turnovers and the scoreless trips in the red zone and they couldn’t stop Crawford when it mattered most.

“Tonight wasn’t our night and a lot of things didn’t go our way,” Emmaus coach Harold Fairclough said. “We turned the ball over and didn’t score when we had the chance and the defense gave up a couple of plays. It was a little bit of everything. But I am proud of the kids for the way they battled. They fought hard. This is where you want to be every year, playing for a district championship.”

Fairclough said few thought Emmaus would be playing a 13th game considering it lost quarterback Jake Fotta to a torn ACL before the start of the season.

“We lost an all-conference, all-everything type of quarterback in the first week of camp, but the seniors rallied together and played for each other,” Fairclough said. “We got to where everyone wants to be. I’m proud of the effort.”

The first half was filled with just about everything, especially turnovers.

In fact, Deante Crawford fumbled on Freedom’s first play from scrimmage. Emmaus took over at the Patriots 21 and got a 26-yard TD pass from Josiah Williams to Chase Fotta to take the lead.

Freedom answered with a scoring drive capped by Brian Taylor’s 9-yard TD run. It came one play after Emmaus thought it had recovered another Freedom fumble, but Crawford was ruled down.

The Green Hornets held on to the ball long enough for a 9-minute, 17-play drive that stalled at the Freedom 5. Emmaus missed a 22-yard field goal.

After some issues with fumbles, Crawford held on to the ball for a 72-yard run to the Emmaus 1. Two plays later, Taylor kept it for a go-ahead touchdown and Zeyad Ragab added his second PAT to make it 14-7.

Emmaus had one more turnover just before halftime as Alexie Sangster picked off a Williams pass and returned it to the Green Hornets 23, but four incomplete passes by Freedom ended the half.

Emmaus got a late TD pass, but it was too little, too late.

Freedom was playing in its sixth District 11 final Friday night with a 1-4 record. The Patriots lost to Liberty in 2008, the same season the Hurricanes won the PIAA crown. They also lost to Parkland in back-to-back 6A finals in 2016 and 2017 and to Nazareth last year. The one title game win was over Emmaus, 49-17, in 2018.

The Patriots, who now own a 28-12-2 all-time series lead over Emmaus, clinched their fourth 10-win season under coach Jason Roeder, who entered the game with a mark of 119-71 in 17 seasons in charge of the program.

The Green Hornets were playing in just their second district final and needed to win for their third 10-win season in the last six seasons. Harold Fairclough entered the game with a record of 45-18 at Emmaus in six seasons in charge of the Green Hornets and 95-46 overall counting six seasons at Central Catholic.