For one BASD Alum, a Chance to Make a Difference for the Planet 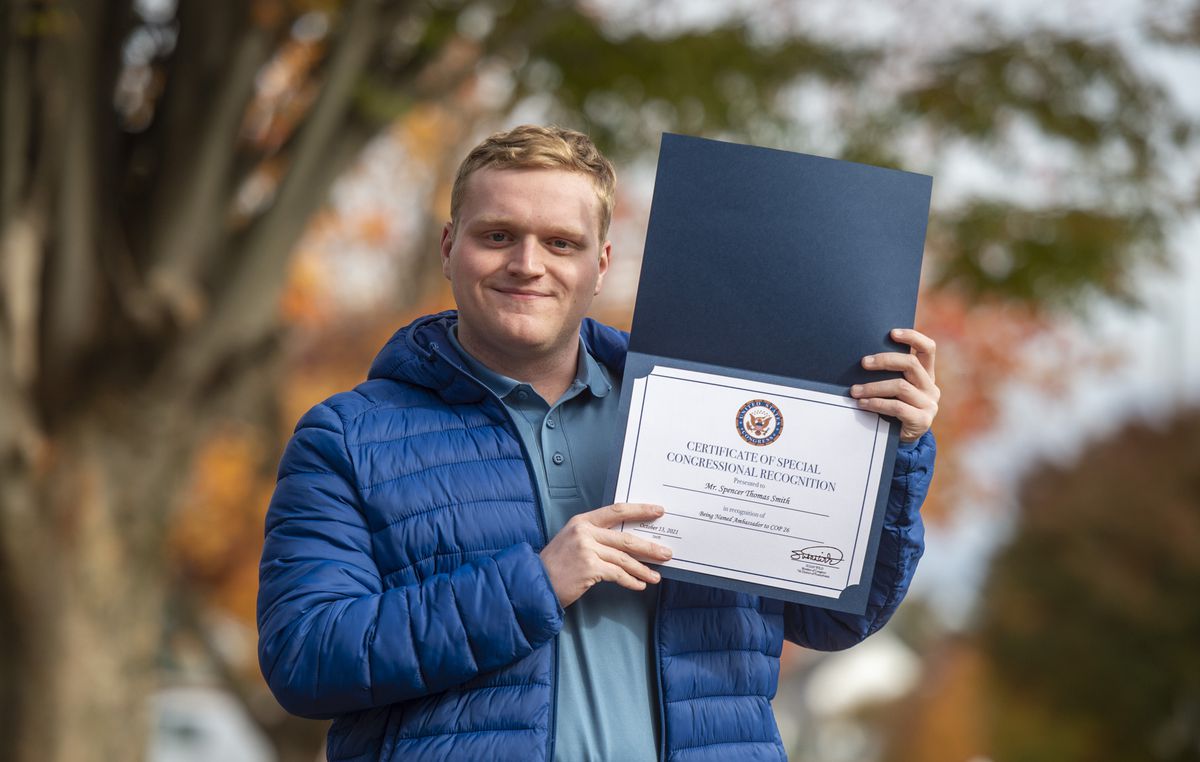 The evidence of climate change is clear: Our exponentially warming planet is careening toward a global catastrophe.

But Spencer Smith offers a glimmer of hope.

“I look at it more positively,” said Smith, a senior York College civil engineering major from Bethlehem Township. “It’s the engineer in me. Engineers are problem-solvers. If there’s a problem, I have work to do.”

On Friday, the 2018 Freedom High graduate left for Scotland to attend the second half of the United Nations Climate Change Conference of Parties. He’s one of only 10 college students in the country to do so.

Broadly speaking, the goal of the conference — which runs through Nov. 12 — is to gather leaders from across the globe to strengthen commitments and set policies that mitigate climate change’s effect on the planet.

The conference is drawing the world’s most important leaders, including President Joe Biden, who urgently called for tougher action on emissions and asserted that solutions to climate change would boost the global economy.

“This is the epicenter of climate negotiations,” said Keith Peterman, a member of the American Chemical Society who taught Smith chemistry at York College. “The outcome will affect everyone on the planet.”

Peterman and another chemistry professor at York College, Gregory P. Foy, are members of the American Chemical Society, a nonprofit scientific organization. The ACS, which has about 155,000 members in 150 countries, gets five United Nations-accredited slots each week at the conference. The organization then gives those slots to college students.

Smith was chosen to attend the second week — not as a college student — but as an observer for the American Chemical Society.

“He is going as a professional,” Peterman said.

They chose Smith because he has demonstrated throughout his college tenure a dedication to leadership, as well as a keen interest in the environment and sustainability, Peterman said.

In addition to his major, Smith is pursuing a minor in environmental sustainability.

“On a personal level, I feel really passionately about sustainability,” he said. “It’s our duty.”

He traveled to Costa Rica just before the pandemic began in March 2020 to study the nation’s recycling program.

“Every person in Costa Rica knew how to work to benefit the country,” Smith said “I thought it was really incredible how they had all these unique solutions.”

Smith’s affable personality was also a big reason he was chosen to go to Scotland, Foy said.

“While at the COP, he will encounter people from around the world, and the ability to communicate effectively is invaluable,” Foy said.

While Smith is in Scotland, he’ll be part of a group of delegates looking at how nations implement the Paris Climate Agreement, a treaty signed by nearly 200 nations, including the U.S., with a goal of limiting global warming.

“The big thing we will be looking at is how can we make sure that the larger countries and smaller countries both benefit and how can make this sustainable,” Smith said. “We have to start taking steps now. We can’t keep kicking the can down the road.”

One of the problems Smith sees is that American looks inward instead of seeing how we act affecting the globe.

“Our approach is to say ‘How does this benefit Americans?’ but other countries are watching us,” he said. “For a lot of these countries who signed on to the Paris agreement, it means a lot that a larger player like the U.S. is in their corner. We have a larger influence.”

Smith had a lot to do to prepare before he left for his trip. He had to undergo U.S. delegate training and met with a representative from the U.S. Department of State.

Of course, the pandemic is still with us. Smith said with the requirements of the United Kingdom and the United Nations combined, he’ll have had to take 10 COVID tests over the course of his trip.

“I told my parents, I will definitely have clean sinuses,” Smith said.

Smith is due to return on Nov. 15 and soon after, he’ll share his experiences with students at Liberty and Freedom high schools.

“Students will be extremely interested in learning from Spencer, a recent graduate, about the global planning he was able to play a role in while at the climate conference,” Roy said.

For Smith, he sees his role as someone who can use what he’s learned to make a difference.

“Each generation has its own battle and this is going to be my generation’s big fight,” Smith said. Hopefully if we’re successful, our children and grand-children will have a different fight separate from this one.”

By Jennifer Sheehan
Story by The Morning Call