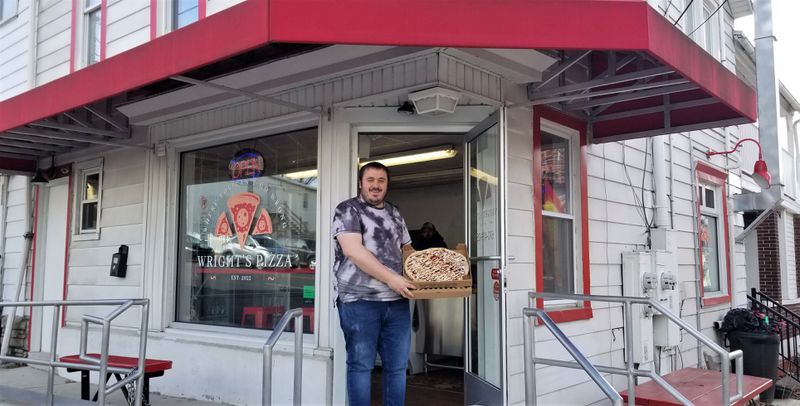 Shane Wright, a 2011 graduate of Freedom High School, poses with a southwest chicken pizza outside of his new eatery, Wright's Pizza, at 835 N. New St. in Bethlehem.

“We’re known for our specialty pizzas,” Wright said. “And if what you’re looking for isn’t on the menu, we’ll still make it if we have the ingredients.”

In Bethlehem, customers can sit at a few high-top counter seats or an outdoor picnic table, but the eatery mostly handles takeout and delivery orders, Wright said. Online ordering is available through Grubhub, Slice and DoorDash.

Wright’s Pizza, which has a slogan of “where you can’t go wrong,” also offers salads; strombolis; hot and cold subs (also available as wraps) such as California cheesesteaks, chicken parm and tuna hoagies; appetizers and sides such as Buffalo wings, pepperoni bites and mac and cheese bites; and desserts such as cannolis, cheesecake and triple chocolate cake.

“Our dessert pizzas have also been selling a lot,” Wright said. “We have everything from Nutella pizza to cannoli pizza to Oreo pizza.”

By Ryan Kneller
Story by The Morning Call