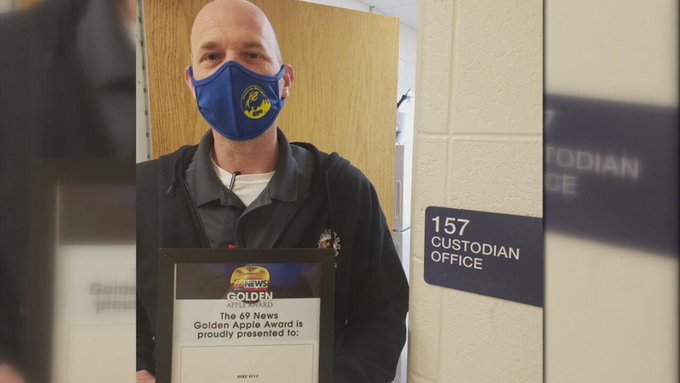 The Golden Apple Award Winner this week, came to 69 News from the Bethlehem Area School District's Broughal Middle School. Everybody knows somebody who works overtime in the background, to make sure everything up front shines. At Broughal Middle School, that guy, the staff unanimously says, is head custodian Mike Sule.

"I can't even begin to tell you all the things that he has done for our school," says Broughal Middle School Principal Rick Amato. Mike’s above and beyond mentality, is why General Music teacher Amy Putlock nominated him. She says one of the first thing she tells her music students is that nobody succeeds without the custodial staff.

"He often anticipates problems before I can even see and really have a chance to stress out about them," Putlock says.

This year, Mike got called on in new ways nobody could clearly see coming. When the pandemic hit, Mike rallied his team and figured out – down to the second – just how much time it takes to deep clean the school every day. He came up with a safe way for the graduating 8th graders to say goodbye last spring. The little things, that - in an uncertain time - become big things.

"He cleaned out every single locker in our building last year, labeling the bags, putting the students' items in them so that at the end of the year, students could get their things back. That means something to them," Principal Amato says.

"His normal far exceeds what anybody would expect to be normal," adds Putlock.

All of this praise for Mike is, not surprisingly, a lot for him to take. Mostly because, he’s all about giving.

"It is very humbling," he tells us. "I'm just, I'm the guy who comes to work, does his job, holds up my end of the bargain, when you have a job, you do your job, ya know?" Sule says.

Mike credits his team. They know their work is essential. They know each step they have to take. His principal says, that’s why it’s important to honor people like Mike - the ones quietly making sure these doors stay clean, but more importantly, stay open.

"Right in front of us, we're seeing the value of that educator, that person, that custodian, that secretary, that nurse, that they connect and mean something for students, and the students connect to them...there's a lot of heroes in the educational community, and they need recognition.

So, we recognize you, Mike Sule – in the middle of a pandemic and the unknown, for being the guy firmly holding the line.
Watch his video!
By Joy Howe
Story Credit to 69 News
Do you like this post?
Tweet