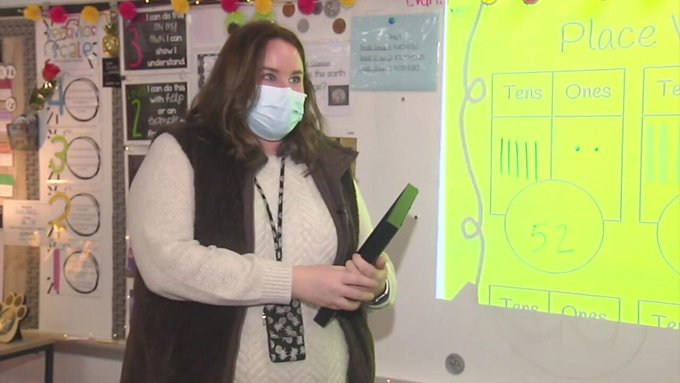 The 69 News Golden Apple Awards is where they take time to honor educators across Eastern Pennsylvania. This month, their winner is a teacher who made sure she spread the love to her students, even when they couldn't be in school. It's pretty hard to surprise a teacher. After all, they've seen just about everything.

But with a little help from her principal, we walked into Lauryn Bencker's second grade classroom at Fountain Hill Elementary School, to tell her just how special she is. Mrs. Bencker is one of thousands of teachers across the area, and the globe, who had an already challenging job, taken to the next level during a pandemic.

"Yes, this year has been tough, but I think all of the toughness is overshadowed as soon as I step into the classroom," says Mrs. Bencker.

"It lets the kids and the families know that I do love them and I'm there for them, and vice versa too!" she says.

"Just to show they were there for the kids, and the celebration would still continue, even if it was at a distance," explains Principal Courtney Stambaugh.

Principal Stambaugh, says yes, times are tough, but Mrs. Bencker is a perfect example of the entire staff here.

"When they feel anxious but are just kind of forced to push their anxieties and fears and just kind of underneath, and really just go out and be there for the community," Principal Stambaugh says proudly.

Teachers are the people we have counted on during this time. They've been there on Zoom, in classrooms, even visiting homes. Because even in the middle of a mountain of challenges, teachers have climbed higher - in Mrs. Bencker's case, you'd could call her a hero on the hill - the Fountain Hill.

It really does, and for that, we thank you, Mrs. Bencker - you are a shining example of a 69 News Golden Apple Award winner.

"This is where I belong. I love it here, I really do!" she says.