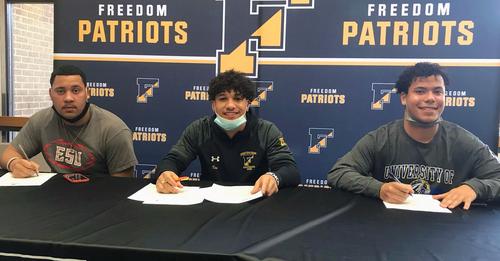 More than two months after that victory over Emmaus, the Patriots kept their success going as three standouts penned their letters of intent to play college football on National Signing Day.

Deante Crawford and Juan Feliciano signed with East Stroudsburg University, and Lorenzo Feliciano committed to the University of New Haven on Wednesday.

“We work very hard. Our program works very hard. This is what we live for: championships and we want to get guys to the next level. It’s exciting to see all these guys accomplish their goals and their dreams,” Lorenzo Feliciano said. “(New Haven) just came off a (Northeast 10) conference championship and they made it to the NCAA playoffs for Division II, and I really want to be a part of that. We had a winning culture at Freedom and I want to be at a winning culture in college.”

As Juan, a lineman, and Lorenzo Feliciano, a linebacker, sealed their commitment to continue their career on the gridiron, they also ensured they will be the first members of their family to attend college.

“It means a lot. Get a good education in college, and go out and get jobs, just to help our family in the future is going to be amazing,” said Juan, who is one of three triplets with Lorenzo and sister Ciana.

“We get caught up in trying to win football games during the fall, but it’s days like this that you realize that we’re part of something bigger. It’s always great to see kids parlay football into furthering their education,” Freedom coach Jason Roeder said.

Crawford and Juan Feliciano, who were both first-team selections to the lehighvalleylive.com All-Area squad, will join a strong Lehigh Valley contingent at ESU.

“(East Stroudsburg) started recruiting me in the summer of this year, went to their camp and then they started showing interest,” Juan Feliciano said. “After that, I just knew they were going to be home right away.”

Crawford, who constantly credited his line with helping him rush for 1,719 yards and 25 touchdowns this season, welcomes the idea of running behind Feliciano again at the collegiate level.

Lorenzo Feliciano, an All-Area second-team selection, is set to continue his football career on a New Haven team that has recorded a winning season every year since 2009.

“I sent my film out to just about every D-II, D-III school, even D-I schools. (New Haven) actually said they liked my film, so I went out on a visit,” Lorenzo Feliciano said. “I loved the school, everything they have to offer is everything I want in a school and their football program is very elite.”

The Patriots have produced talent across all three divisions of college football in recent years. Senior Braelin Moore, the 2021 lehighvalleylive.com Football Player of the Year, will join his older brother Kaden at Virginia Tech in the fall.

“It’s something we’re really proud of. We have 25 guys playing (collegiately) next year and we have a lot of guys contributing right away early on. Kaden Moore, Tristan Wheeler (Richmond) are contributing at big-time programs as freshmen,” Roeder said. “It’s a very rewarding part of my job is to see our kids mature and develop at the next level.”

Story by The Lehigh Valley Live